My friend and colleague John Lalor just shared with me a brilliant article from The Guardian that I wish to share with you. http://www.guardian.co.uk/stage/2012/nov/28/how-to-act-acting-tips  Below is a paste of the article.

Following that is also a great little YouTube video about what do when you get lost with your lines in an audition.

How to act: stage stars share their acting tips

What makes a great stage actor? As a competition to find Britain’s best am-dram society gets under way, old hands Roger Allam, Miriam Margolyes and others offer a few words of advice 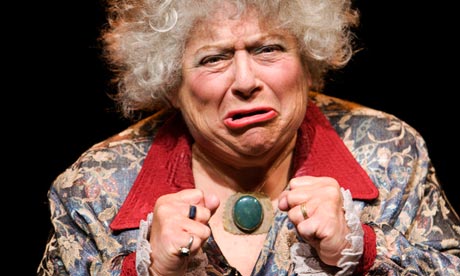 ‘I don’t see any difference between amateurs and professionals’ … Miriam Margolyes in Dickens’ Women. Photograph: Murdo Macleod for the Guardian

1. Learn your lines so well that you never have to worry about them.

2. Keep a notebook about the play, the character, the period, your moves. It’ll help you remember what you have done so far – especially if you’re having to rehearse in your spare time rather than all day, every day.

3. Never go dead for a second on stage. Even if you are doing nothing, do it actively. Listen.

4. If something goes wrong – say someone drops something – don’t ignore it. Try to deal with it in character.

5. Warm up your voice and body. Get used to the size of the auditorium; if you don’t know it already, go to the worst seats in the house and have conversations with people on the stage so you get to know what kind of energy is needed to be heard.

6. Be ambitious. The great actor, director and playwright Ann Jellicoe commissioned writers like Howard Barker and David Edgar, and put on magnificent, large-scale plays in Dorset that involved the whole community.

7. On the other hand, probably avoid Aeschylus’s Oresteia or anything by the German dramatist Heinrich von Kleist.

8. Try not to worry about embarrassing yourself. That’s a lifetime’s task.

9. The Victorian actor Henry Irving said: “Speak clearly and be human” – but if you listen to his recordings, the boundaries of that are pretty vast. James Cagney said: “Never relax, and mean what you say.” I think that’s pretty good.

10. You are released from the miserable aspects of having to earn your living in this marvellous business called show, so have fun: be as serious as you like, but enjoy yourself.

Roger Allam has worked with the RSC, the National, Shakespeare’s Globe and in the West End. TV and film includes The Thick of It, Tamara Drewe and Parade’s End.

I wish I followed these rules all the time when I act. The truth is, you really learn these things by doing it: “acting” means putting it all into action.

1. Trust your playwright. If he or she is a great one, most of the work will have been done for you.

2. Read the play at least three times out loud before standing it on its feet. A lot of the blocking (the positioning of the actors on stage) will come out of understanding what your characters want, and from whom.

3. Listen to the person who’s talking – unless your character isn’t listening to them.

4. Don’t be afraid to make an eejit of yourself.

5. Change the look in the other person’s eye.

6. If it’s in verse, paraphrase it first.

8. Remember that most characters use words to affect, connect with or change the other person.

9. As [the actor] Ralph Richardson said, before you leave the dressing room, look in the mirror and ask yourself: “Is it human?”

Niamh Cusack has worked at the RSC, the National and the Old Vic. TV and film include Heartbeat and Hereafter.

2. Choose a play you feel confident you understand: liking a play isn’t the same as understanding it.

3. Cast to the performers’ strengths. I’ve seen amateur directors pander to the ego of the cast member with the strongest personality. Bottom the Weaver in A Midsummer Night’s Dream is Shakespeare’s warning from history: he says he can play lions and lovers and everything in between, but he can’t.

4. Sit around a table and read the play for much longer than you want to. It might seem boring, but it saves loads of time later: you’ll find that rehearsals fly along because everybody understands what they’re doing.

5. Leave more time for technical rehearsals than you think you need. You’ll be amazed at how much you still have to do once you get into the theatre: working out the distances between everything on stage, what the lights are like, where your props are.

6. Try to perform your play for more than five nights. Amateur groups often do a few scattered rehearsals across a few months, and then perform it once or twice. But if you perform it more often, you’ll see acting more as a job than as a one-off, razzle-dazzle thing.

Paterson Joseph has worked extensively with the National and the RSC. He also stars as Alan Johnson in Peep Show.

I don’t see any difference between amateurs and professionals – so I would give my tips, such as they are, to anybody. The aim of any actor is the same: to tell the truth in such a way that people will be entertained, uplifted and surprised.

1. Listen before anything else.

2. Read the text over and over again, and make sure you know the lines.

3. Go and see other performances, and be critical about them: work out whether you’d have smiled in that place, or turned your head at that moment.

4. Never show off. You can sometimes come to a particular point in a show and think, “I’m really good in this bit.” Never, ever think that.

5. Never read reviews. I haven’t read mine since I was in rep.

6. Never know more than your character knows. I’m not talking about research; I mean that when you are performing, you must stay inside the truth of your character. Don’t signpost to an audience what they should be thinking.

Miriam Margolyes has worked at the RSC and in the West End; she has been touring her one-woman show about Charles Dickens and his female characters since 1989. Films include The Age of Innocence and Harry Potter and the Chamber of Secrets.

1. Read as many plays as possible, especially by classical writers such as Ibsen, Chekhov and Shakespeare.

2. Watch performances on YouTube. There are so many amazing theatrical snippets on there now. It’s just as useful to watch bad performances as it is to watch good ones. You need to be able to differentiate.

3. Go to the theatre as often as you can.

4. Turn up on time. If you’re going to commit to something, you should see it through with good grace.

6. Always have a huge supply of cakes and sweets – both for your sugar levels and to butter everyone else up.

7. People-watch: it’s the best way to develop a character. When you’re walking down the street, or sitting on a bus, in a cafe or doctor’s surgery – don’t close yourself off.

8. If you’re cast as a historical character, think of a modern-day equivalent. In rehearsals for Ibsen’s An Enemy of the People, for instance, I encouraged an actor playing the mayor to channel Boris Johnson.

Julie Graham has appeared in Doc Martin, Bonekickers, Survivors, At Home With the Braithwaites and The Sarah Jane Adventures.

….and now for the video about what to do when you’ve messed up your lines from Casting Director Marci Liroff’s “Audition Tips: Can I Start Over?!”:  Audition Tips

I create theatre. I teach theatre.

Recently retired from a long, happy and rewarding career in arts education, I am now in the process of reinventing myself and fully immersing in the theatre community. This blog is about my experiences and personal musings as I stumble through the third act.